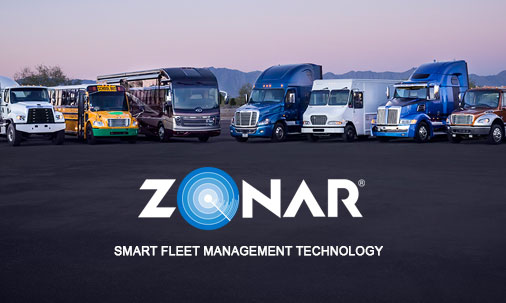 Seattle Wash. – December 5, 2016 – Zonar, the leader in smart fleet management technology, announced today that Ian McKerlich has taken over as president and CEO. McKerlich, who had been serving as president at Zonar, succeeds Brett Brinton in the CEO role as part of a planned leadership transition resulting from the majority investment stake in Zonar by Continental AG. Brinton remains with the organization as a strategic advisor.

“The entire team at Zonar is focused on continued innovation and modernization of connected intelligence solutions for commercial transportation so that we meet fleets' evolving safety, efficiency and compliance needs,” said Ian McKerlich, president and CEO at Zonar. “With an expanding leadership team and support from Continental AG, we've dramatically improved our ability to do just that.”

In addition to McKerlich's new role, Zonar has promoted technology industry veteran Larry Jordan to senior vice president of product management. Jordan is responsible for managing all Zonar products across their lifecycle. One example is the Zonar Connect tablet and platform announced in October, which empowers commercial fleets to take greater control of their operations.

Jacob joins Zonar as a seasoned technology executive who has built and led the delivery of world-class products and services at companies including Hewlett-Packard, Walt Disney Company, Evri.com, Vulcan and others. At Zonar he will be in charge of software development, where he will lead engineering teams to deliver Zonar applications and APIs.

Maglaque joins Zonar as an award-winning product and technology leader with over 20 years of experience managing large-scale products and services for both fast-paced start-ups as well as Fortune 100 companies, including Apple, Microsoft, Walmart Labs, Macy's and Internet-pioneer RealNetworks. At Zonar Maglaque will be responsible for program management, product delivery and managing the company’s partner programs.

“Adding experienced leaders such as Chad and Arun will improve our ability to quickly deliver Zonar products to customers and work with partners and application developers to make sure we meet all of their fleet management technology needs,” McKerlich said.

About Zonar
Founded in 2001, Zonar has pioneered smart fleet management technology by providing innovative technology that has changed fleet operations in the vocational, pupil and commercial trucking industries. With a unique focus on this field, the Company offers a complete suite of solutions and specialized platforms for our customers in multiple markets. Our patented, award-winning technology keeps fleet owners and managers connected to their fleets and drivers to dispatchers. Headquartered in Seattle, Zonar also has a Technology Development Center in downtown Seattle, a regional office in Cincinnati, and a distribution center outside of Atlanta. For more information about Zonar Systems, go to www.zonarsystems.com